Posted on February 24, 2014 | Comments Off on Just Peace Circles in Central America

Bette has been working for peace with justice in Central America since she founded CASA de Maryland www.casademaryland in 1985.  Recently she traveled to Guatemala, Nicaragua and Honduras.  In Guatemala, she traveled with the Highlands Support Project www.highlandsupportproject.org to the ancient Mayan capital of Xela (aka Quetzaltenango).  The program has organized 26 women’s circles in the villages of the highlands. In Nicaragua, Bette joined a wedding caravan for her dear friend, Becca Wheaton, and spent time in the village of Jinocuao as well as Granada and San Juan del Sur.  After the wedding, she connected with Jenny Atlee and Tom Loudon and met her old friend Dada Maheshvarananda for their trip to Honduras.

Dada is a Proutist monk who lives and works in Venezuela.  See more of the Prout Research Institute of Venezuela at www.priven.org. You can also learn about his speaking tour regarding his book “After Capitalism” at www.proutaftercapitalism.blotspot.com

Jenny & Tom are based in Managua, Nicaragua for their organization “Friendship of the Americas” www.friendshipamericas.org. Since the Honduran coup of 2009, the situation there is highly unstable and thus much of their work is currently focused on Honduras.  The Report of the Commission of Truth on which Tom worked was published in April 2013 and documents “the voice of greatest authority…the victims”.  Their Project of Accompaniment in Honduras (PROAH) provides an international presence to those who document the human rights violations and disappearances.  See the PROAH blog on the right side of their website.

We were invited to come to Tegucigalpa, Honduras, to support the staff of COFADEH -The Commission of the Families of the Disappeared www.cofadeh.hn -who are on the front lines of the work for justice in this troubled country.  The organization has spent more than 25 years documenting deaths and disappearances and since the 2009 coup they have been incredibly busy!  The bus ride was about 9 hours each way with a long border crossing and police stops along the way.  With some trepidation (after all, Honduras had the highest murder rate in the world in 2013), we crossed the border into the mountains of Honduras and found our way into the capital city.

Bertha Oliva, COFADEH’s executive director, had decided to give her entire staff of 18 a day out of the city for “sesiones de terapia relajamiento” or sessions of relaxation therapy.  Each day we journeyed by mini-bus out of the city and into the mountains to their beautiful retreat house called “Lugar Contra la Olvida” (a place against forgetting).  It was funded by a gift to Bertha from the European Union for COFADEH’s human rights work.

Bertha Oliva, Director of COFADEH Commission of Families of the Disappeared in Honduras

Bette and Dada led peace circles, cooperative games, yoga and meditation, singing and body work that renewed the staff to wholeness.  Everyone returned to their work with renewed energy and increased understanding of how to reduce the stress in their own bodies and support each other better.  We promised we’d tell their stories back home and return to support their important work.  We will see Bertha Oliva when she comes to Washington DC in March 2014 to testify to the Organization for American States about the situation in her country.

Bette & Dada facilitating a peace circle for healing and relaxation.

We are looking for peace workers and healers to join us in return trips to support our sisters and brothers of COFADEH and PROAH in their work and let them know they are not forgotten.  After all, we all all one family, and what affects any of us affects all of us. We do this work so we all may be healthy and live peaceful, happy lives.

A word on Guatemala:  Since the US overthrew the democratically elected government in 1955 and imposed military rule, the military rules.  Although their civil war of 36 years ended in peace accords in 1996, it’s not a peaceful country.  Neo-liberal capitalism supports 10 wealthy families who own most of the land.  NAFTA – true to its reputation – benefits the US and causes great hardship on trade from Guatemala.  Adding to their already troubled economy, the US deports 2000 to 4000 persons back to Guatemala every month.  The indigenous (Mayan) are about 60% illiterate, and 2 out of 6 children are “drastically” malnourished (meaning mental and physical health is stunted for life).  There is a doctor to about each 100,000 people in the countryside.  Village leaders who don’t obey government and military orders are accused of “drug – dealing” and put in jail with no recourse.  Women who organize are specifically targeted for repression.  Our sources spoke of a revolution needing to happen.

The exciting thing that’s happening in the country is the renaissance of mayan culture and indigenous ways.  We saw it bubbling up everywhere as women are recovering their voices and power and reconnecting to “madre tierra” (mother earth). 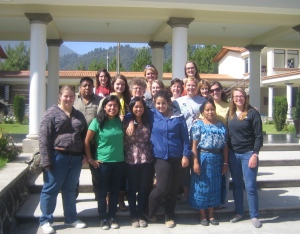 Bette & Mirna, a Mayan woman working with the project.

The view of Lake Atitlan from Casa del Mundo.

This entry was posted in Uncategorized. Bookmark the permalink.